← Wet Commute Home and a Cool Weekend Ahead
Tropical Storm Sandy has it’s sights on the northern Caribbean. What are the impacts on Florida? →

The main story this week will be ‘calm before the storms’.  Notice the ‘s’ on the end of storms.  In about seven days, we will be talking about tropical storm Sandy and a moderately strong cold front that will be crashing through the southeast this weekend.

Starting with the tropics, which have come alive once again. I think the Atlantic basin will spin up 2 more storms before the season is over, one of which will form this week. The Caribbean tropical wave that I have been talking about for the last few days has spun up a broad area of low pressure located SSW of Jamaica. The area of low pressure has a central pressure of 1005 millibars and has been designated invest 99L. According to the models, which are in great agreement, 99L will slowly drift westward over the next 2 days before being pulled out by a retreating high pressure system currently located over the SE US. After that happens, models agree that what will be Sandy will move NNE to NE over Jamaica, Cuba, and the Bahamas. From there, model spread widens, but a few models create a scenario where Sandy runs up the east coast as a tropical cyclone. It’s too early to tell how and where this will mix with the cold front, which at that time will be pulling into the northeastern US, and what impacts it will have. I can just as easily see this system impacting Bermuda more than the United States.

The second system we have to watch is a strong low pressure system that will build in the Great Lakes later in the week. That will be followed by an equally strong high pressure system that will create a few windy days in the pacific northwest and northern plains states by mid week. The cold front, which will guide Sandy up the east coast or up the western parts of the Atlantic, will make it to Florida on Saturday night or Sunday morning and work its way east though Monday.

Impact: What does that mean for your weather? Sunny skies all week long! But wait, you just said there was a tropical cyclone and a cold front coming!  Well, you’d be half right.  For 90% of Floridians, your weather will actually be better because of 99L. Whatever 99L may become, she will bring in northerly winds and drier air from Georgia and the Carolinas. As you’ll see below on my five-day for Tallahassee, highs will be warming up into the middle 80s and lows will return to above average. I put in a slight rain chance for Thursday because that is the one day that 99L will be close enough that it’s rain shield may push a few extra clouds and showers into the area. In no way should any of this weather cause you any distress, unless you booked a cruise to the Bahamas for late this week. And Miami might actually be able to witness a true hurricane instead of the tropical deflations my noles saw this past weekend down there. No, I really do not expect a hurricane to be anywhere near Miami, but I had to throw a jab in there somewhere.

Get all of your outdoor plans done this week because this upcoming weekend (especially the later half) may not be a great outdoors kind of weekend. If the Climate Prediction Center is right, next week may be quite cold in this neck of the woods. For now though, enjoy this: 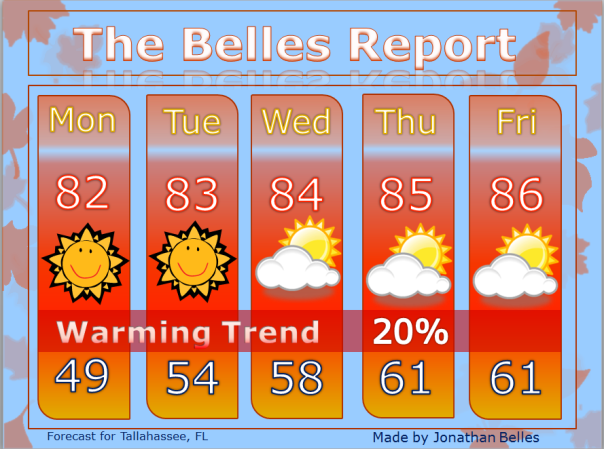 ← Wet Commute Home and a Cool Weekend Ahead
Tropical Storm Sandy has it’s sights on the northern Caribbean. What are the impacts on Florida? →