← Julio Turns Up Waters North of Hawaii, Iselle Brings Heavy Rain
A Trip to the Dentist’s Chair: The Seasonal Forecast →

Julio Moves Into The Open Pacific While the Atlantic Heats Up

Although it seems that the tropics have cooled off just a bit, there is still a lot to talk about!

Hurricane Julio continues to move NW away from the Hawaiian isles today. Julio maintains winds of 90 mph, but is expected to weaken in the north Pacific over the next five days. Waves on Monday will fall below 10 feet on the north facing beaches. With the supermoon being overhead, we actually got some pretty great night-time visible imagery. You can see what looks like the city of Kahului on this image as a brighter dot, but I’m not sure of this.

Time is 2:42AM in Hawaii when this night time visible image was taken. Well after dark local time.

Where did Bertha Go?

Ex-Bertha has arrived in the UK this morning. Ex-Bertha is bringing heavy rain and tropical storm force winds to the northern parts of Europe and the North Sea. The remnants of Bertha are expected to move across the North Sea and toward Norway. The draping cold front will push eastward into central and eastern Europe. 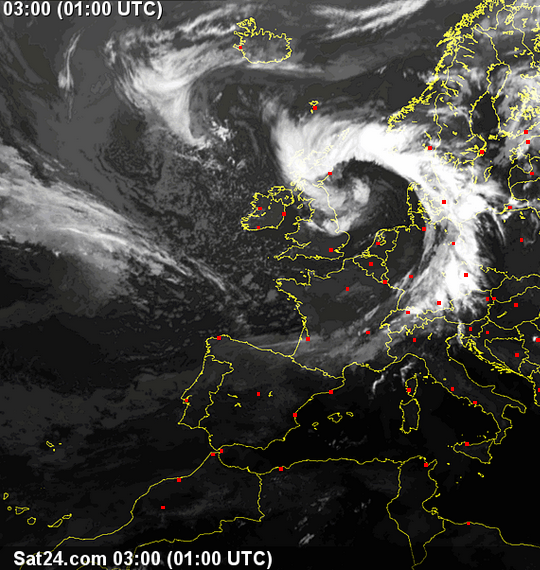 The African Easterly Jet has provided us with our newest invest, and it has some spin to it. This remains a weak invest, and it will have to deal with dry air and shear just like TD2 and Bertha had to deal with. We’ll also have to see if this system loses the vorticity (spin) when it moves away from the easterlies. Current models bring this system WNW for the next five days and slowly intensify it while doing so.

What is the African Easterly Jet? See this week’s Meteorology Mumbo at the top right of this page!

Get a good supermoon shot? Send it to me on twitter!

← Julio Turns Up Waters North of Hawaii, Iselle Brings Heavy Rain
A Trip to the Dentist’s Chair: The Seasonal Forecast →