After a brief increase in development chances yesterday from the NHC, it seemed as if the subtropics were going to be dormant for at least a few more days. And then development chances shot up this morning, and then Tropical Storm Claudette was born this afternoon. This was well forecast by the mesoscale models whether Claudette wanted to be late to the party or not as far back as 48 hours ago. The system evolved over North Carolina as a frontal system with a slight dip in central pressure on Saturday evening. Since then, the system went over the loop current with 80°F+ water surface temperatures. Fronts dissolved overnight and a tropical cyclone…with 50 mph was born.

It wasn’t too much of a surprise that this system had winds of 45-50 mph. The mesoscale models had a weak tropical storm while the system was over the eastern US. Even the global models had a weak reflection of a warm-cored system with a closed center. HRRR notably had development and/or intensification pegged by yesterday afternoon. The below ASCAT imagery from this morning confirmed that thought process. Because of the small spatial size of this system, it is no shock that the smaller scale models did better this time around when compared to the global models.

ASCAT imagery from 14z this morning

The good news for eastern Canada is that Claudette is quickly moving into an area of strong and intensifying shear. Combined with considerably cooler water, this tropical storm will become post-tropical by Wednesday at the latest. Satellite imagery is already showing an exposed center. Claudette is expected to continue to accelerate toward the northeast and toward the eastern end of Nova Scotia and Newfoundland.

Even as this system is quickly removed from our memory as a short-lived tropical system by midweek, it does bring up a good point for what will likely be a season of non-MDR/non-deep tropics type systems. With the large convective squall line crossing the Midwest and central Appalachians today, one has to think that these continental systems may be a decent source of (sub)tropical systems this year. At the very least, there is a cool front coming down the Appalachians this week with embedded shortwaves/energy that should be watched for both severe weather and maybe even tropical weather. In fact, this system ends up in exactly the same spot in 84 Hours. Obviously this time it looks frontal however. 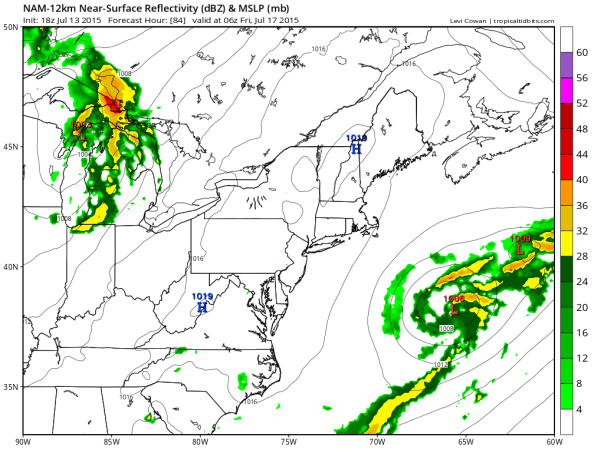 It will be interesting to see how far south that front comes. Some indications show that this front could come as far south as south Georgia with increasing weekend rain chances and decreasing temperatures for Georgia, Florida, and the Carolinas. Getting into that new phase will probably result in more severe pulse-type systems than normal.

Current Squall Line in the US

More than 500 reports have been recorded at the SPC between yesterday and today[below] from central Minnesota to North Carolina. These reports will probably continue into the Carolinas and much of the southeast through Wednesday. The moderate risk continues into the overnight hours in a secondary line well to the northwest, close to the location where the current squall line began.

News: You may see a few changes in how this site is arranged over the next few weeks, and you can now find me on Instagram!

Hope to see you there and on Twitter as always, @JonathanBelles. Quite a roller coaster this trough is. Hopefully you’ll join me for the ride! I’ll be watching the rediscovery of Pluto tomorrow as well with New Horizons.