Potentially Large Impacts to the Bahamas and the US: Hurricane Joaquin Continues to Strengthen

Hurricane Hunters continue to fly through Hurricane Joaquin with the intent to learn about the environment around the system and to hopefully narrow model solutions down. This hurricane is a different system from yesterday in terms of structure. Rapid intensification has continued. An eye feature has come and go on satellite imagery since early this morning. Earlier microwave imagery has confirmed that an eyewall has formed and recon confirms that it is at least mostly closed off. The NHC has hit a home run today by adding key messages to their discussions, so we’ll start there, from the 5pm discussion: 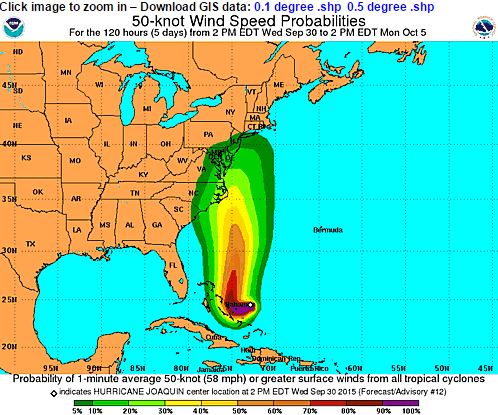 Probability that winds will match or exceed 60 mph. 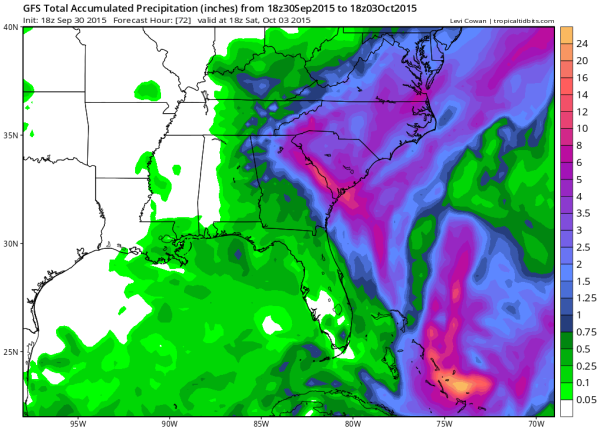 8am Thursday Surf and Wind Forecast/TAFB

Joaquin should continue to drift toward the southwest over the next 12 hours or so. As of the 8pm Advisory, the hurricane hunters found winds of 105 mph and a center slightly to the left of the 5pm forecast. This brings the highest winds to VERY near or over San Salvador and Cat Island throughout the day on Thursday. After monitoring the respective steering layer charts for the last couple of days, it isn’t too much of a surprise that Joaquin has been left of the forecast in the short term by a few miles. It’s possible that Joaquin makes it deep into the Bahamas as it strengthens as steering currents for a category 4 or stronger are still from north to south in the short term. Steering currents are forecast to change tomorrow which should capture the system and drive it north. The main feature that will drive the forecast track continues to be a very deep trough over the eastern US that will dig into a SE to NW tilted trough. This will continue to drive moisture into the mid-Atlantic and will bring drier cooler air into the deep south.

There is a distinct possibility that Joaquin could be a category 4 hurricane as it moves through the Bahamas tonight and tomorrow. Shear has been unable to hinder any development so far, and upper level winds will be at their peak favorability tomorrow into early Friday. A large outflow channel has set up to the south and an additional channel will set up later this week as Joaquin begins to feel the US Trough. This could allow Joaquin an opportunity to tack on an additional 25 mph on to its current wind speed by Friday. It is very conceivable that Joaquin could become a category three hurricane tonight. Note that the NHC intensity for 0000z was set within the category 3 range, so anticipate an upgrade tonight. Also note that all of the intensity models were nudged up. G-IV and near-surface recon data will be put into the 0000z models tonight. Models continue to underestimate intensity. Pretty close to worst case scenario for the east central Bahamas. 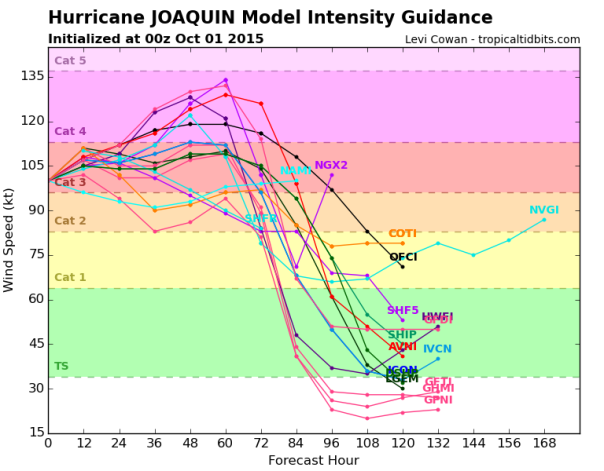 We’ll talk more about impacts to the US when Joaquin’s impacts to the Bahamas let up. I do want to mention that the remnants of Ida do have an 80% chance of reformation by this weekend. This reformation could open the door for some out to sea possibilities, but as the GFS and Euro ensembles show, this possibility remains low.

Joaquin will bring a VERY bad day to the central and northern Bahamas on Thursday with tropical storm wind probabilities over 60% and hurricane force winds anticipated for a few east central Bahamas. It is still very much a prepare, wait, and see approach for US impacts. The trend has been for a more westward track for the US that will have to be monitored. Intensity models continue to underdo forecast intensity, this too will have to be monitored.