Good evening everyone! The tropics are busy as ever right now with scattered storms throughout the entire southern Caribbean. The models are still very gung ho on developing this system. Both tropical waves that I discussed the other day are still moving at about 10-15 miles per hour toward the WNW. The western wave is beginning to get wrapped up in come of the convection north of Panama. I think that the second wave is beginning to feel the effects of being over land in south america.

Nonetheless, the condition of this disturbance is unchanged. BUT! The possible forecast track is beginning to change from the last few days. Before I begin I want to say that nothing is sure until a low pressure center actually forms and can sustain itself. The change in my thinking has been created by a change in the models. Below I have attached the GFS ensembles from tonight at hour 144 – 6 days out. The ensemble below is the average of the GFS at 144 hours running many times with many different initial conditions. Orange signifies upper level higher pressure and blue signifies upper level lower pressure. 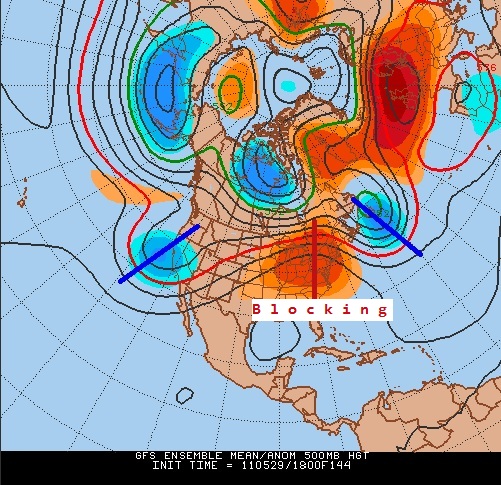 The eastern two-thirds of the US is covered by a very large ridge of high pressure. The western atlantic is mostly under a weaker trough. Also of note is the circle that covers the Gulf of Mexico, which is an upper level low that will be nosed into the Gulf by that trough over the next 3-5 days. We’ll look at this in the coming days.

The main change between a few days ago and tonight is the relationship between the aforementioned strong ridge and the weaker trough. The good news tonight is that we will have a few days to watch the disturbance. Unfortunately this doesn’t help those in Texas that need the rain, and it will keep the storm train over the northern tier of the US. The ridge will be staying in place over the next week or so, and it will be strengthening to the east and west. This creates a blocking of anything from the south to gain any latitude. The trade winds will keep this disturbance from making any progress eastward. This basically traps anything that stirs up in the Caribbean until one of the two blocks breaks down. Contrary to moving northeastward with a stronger trough over the Atlantic as was shown by the models a few days ago, this disturbance will be meandering about the Caribbean until at least mid-week.

All in all, we are in a very stagnant pattern across the southeast and the Tropics. The pattern will be dictated by a very complex arrangement of pressure across North America, and we will have to wait and see what starts moving in a few days.

For now, stay tuned. I will be adding another entry either tonight or tomorrow on a personal note. I do not expect to make many personal entries, but now that 100 people have read this blog I think it is time. I want to outline what I expect this blog to be like and what I expect you all to get out of it. Until then, have a good night and stay safe!! If you have any questions about the very technical discussion above please leave a comment below and I will get to it as soon as I can! Thank you!