As of 8pm tonight, the hurricane hunters are out in Debby and are finding a pressure of 993 mb. The current flight is relatively new, but earlier today they found winds of 45 mph east of the center. At my location in St. Pete I am well up over 10″ of rain since Saturday and the winds have been consistently gusting to more than 30 mph at times to 40 mph. Last night I had a run in with one of at least 50 rotations/tornadoes here in Pinellas County and during that time winds gusted to over 60 mph.  I’ve heard reports of winds up to 100 mph closer to the coastline along with damage around the Bay Area. Debby and one of her tornadoes killed one person yesterday, and her flooding rains killed one more in north Florida. Below is a map of yesterday’s circulations caught on radar. Most of these will remain unconfirmed, but 7 of them have been confirmed by the NWS: 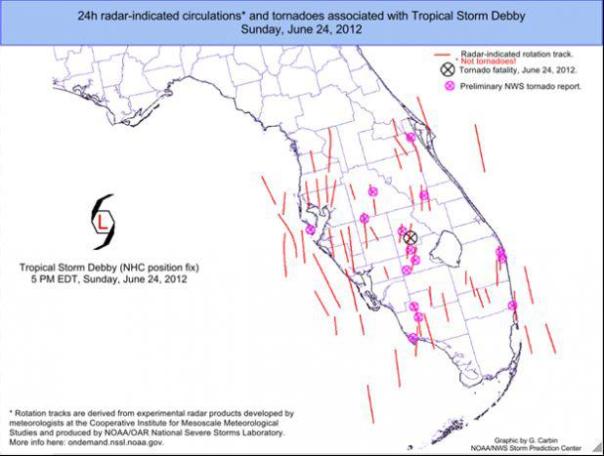 Although the story yesterday was tornadoes, today it is a lot more about flooding. Surge in Tampa Bay, Pinellas County, and Apalachee Bay have created for more beach front property. Surge, waves, and very high rainfall totals have put some beaches under 2-4 feet of water. Bayshore Boulevard in Tampa has been underwater for at least 24 hours. Flooding due to surge will remain a threat as long as Debby spins in the Gulf.

Torrential rainfall has moved around the gulf from the west coast to the northern coast and Forgotten Coast. Rainfall totals yesterday topped 16″ in a few spots from northern Pinellas up to central Hernando county, which turned many streets into flowing canals. Today, Wakulla county was ground zero for the flooding. Almost the entire county received totals of 15″ according to radar. It continues to rain there and evacuations are in place due to the heavy rainfall.

Many counties declared local states of emergency, and the State of Florida followed suit later this afternoon. No national guard personnel was activated, however the coast guard remains active with water rescues. At this point I want to stress DO NOT DRIVE on a roadway that is FLOODED. The Skyway bridge remains closed and the Howard Franklin is slowly reopening across Tampa Bay. The Courtney Campbell bridge is closed. Please check ahead before you travel tonight and tomorrow.

The Forecast: Debby fell apart due to dry air last night and weakened to 45 mph, but I think tonight some modest strengthening is possible. The Hurricane Hunters have just found winds of 59 knots at FL, which translates to about 55 mph at the ground. It seems like the dry air is working its way out and convection is slowly rebounding. As much as Debby will be remembered for her torrential downpours, I will also remember her for her wind. TS force gusts have been on and off here for 36 hours, which is longer than any other system I have experienced. Winds will remain up over night and scattered rain will be likely. The Forgotten Coast will see rain for many hours to come.

Isolated tornadoes are possible along the Florida peninsula tonight into the overnight hours, as such a a Tornado Watch is in place.

As I mentioned, tropical storm force winds are possible and are occurring in some location along most of the Florida west coast tonight, as such a Tropical Storm Warning will remain in place.

Debby will continue to meander to the north and east overnight, likely reforming here and there. The effects will be the same.

Just one minute: In just one minute, the life of a mother was taken with child in hand. One of the tornadoes yesterday took the life of Heather Town in Venus, FL, who was found covered in barbed wire with her daughter in her arms shielding her from the wind and debris associated with the tornado. Read the story here: http://www.baynews9.com/content/news/baynews9/news/article.html/content/news/articles/bn9/2012/6/25/debby_spawned_tornad.html?cmpid=twitter

I just wanted to send my regards to that family, and send out a reminder to everyone that tropical storms are not something to play with. Be prepared for all storms no matter their strength.