To put it bluntly…not much change in 96L on the large scale this afternoon.  The Hurricane Hunters decided not to go into the system this afternoon, but have scheduled another flight for tomorrow afternoon.  As of 8pm, the NHC upgraded their outlook to an 80% likelihood of tropical cyclone formation. In fact, the Navy has gone ahead and released their formation alert this evening. 96L has a pressure of 1004 mb and winds of 35 mph.

The cloud shield continues to spread across the eastern half of the Gulf of Mexico, which brought as much as 3-4″ of rain this afternoon to isolated areas of the Florida west coast.  Moderate to heavy rainfall continues to rotate around the low pressure system up and down the I-75 Corridor and a fairly robust rainband is moving into the Keys at this hour. According to the HPC, upwards of 6″ may fall along the west coast and Florida big bend through the next five days with far more impressive totals off the coast. According to the TAFB, waves could reach 11-13 feet near and to the northeast of the center of circulation. Rip currents will be a problem along Florida’s southward and southwestward facing beaches through at least the middle of next week. Below I have included the graphicast from NWS Ruskin for the long term. Although it was meant for the long term forecast, everything on it can be used in the short term as well. Numerous showers will pop up by mid morning each day and rotate to the NW by late evening.

You have to look into the physics and dynamics of this system to really see why the NHC jumped from 70 to 80% this evening. 96L slowly drifted away from the Yucatan this afternoon by only about 2 mph to the north according to the Navy. Intense, cold cloudtops waned this afternoon over the Yucatan channel. This is to be expected with a developing system, and thunderstorms should reboot during the overnight hours tonight.  An interesting thing that the downtick of thunderstorms allowed us to do was see the lower levels of the system. Below I have included my general estimates of the center of the system at two different levels. As you can see, these two are not lined up, and I have noted a couple instances of that low level center racing out in numerous directions today. I think that the ‘permanent’ LLC may take over farther to the east overnight nearest to where the strongest storms took place earlier today. The green arrows signify continuing bands of moisture moving into Florida overnight, and the orange arrow signifies general direction of motion over night. 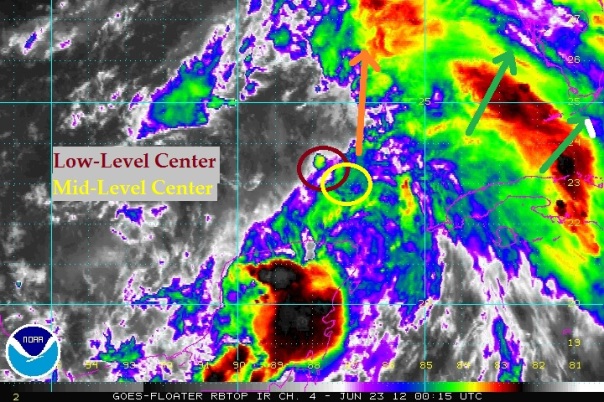 Below are the current early and late track models minus a few (Xtrap, Clp5, CLP, LBAR, BAMD).  You can see we are still in a split camp scenerio with the GFS and its ensemble members in one camp, and the Euro and FIM in the others. One thing to note is that hurricane models (HWRF and GFDL) kill 96L within 48 hours. I think that this is probably because there isn’t one center for the models, which have a tighter resolution, to latch onto. There is great agreement through at least 18-24 hours with a general northward movement, which should give us enough time to wait for reconnaissance data to get the upcoming days. As for intensity, the models agree (minus the hurricane models) about modest development through the next 2 days. 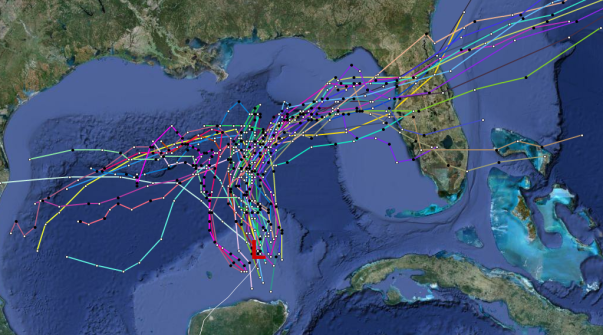 Hurricane Hunters will fly into 96L tomorrow afternoon, and should reach the center around 1pm CT. I think that a tropical depression may form late tomorrow or on Monday, but if there are any large bursts of thunderstorms in the next 12 hours or so, development may occur earlier.