Very heavy rainfall is occurring over the Dominican Republic this evening after convection has seemingly translated westward across the northern Caribbean. The Hurricane Hunters continue to collect information about the low- and upper- level wind fields this evening. The lowest layers of Erika continue to track generally westward and could impact Cuba tomorrow and Florida early next week . 4-8″ of rainfall is possible over the mountains of Hispaniola and Cuba and for some locations in Florida. The death toll continues to rise due to rain, and rainfall-driven mudslides and home collapses. That toll spans multiple islands and is likely over a dozen. Winds continue to gust to 40 mph onshore. It is unlikely that Erika has maintained a strong low level center.

At times today it appeared that a low level center was identifiable 80 to 100 miles to the southwest of Santo Domingo, DR, but since recon has left it has become much harder to find a low level circulation. At 8pm, the NHC is tracking the mid-level convection to near the southern Haitian border. There are a few limited variants of west winds in the limited Wunderground stations in Haiti earlier tonight, and one of the dropsondes dropped by the G-IV  reported WSW winds. As long as this system remains a degenerate, it will continue to follow the trade winds and perhaps occasional strides to the WNW or NW wind stronger thunderstorms. This will result in motions to the left of the current NHC forecast. At this point the forecast is almost beaten to death, so I will be focus on the still large impacts to the Greater Antilles and Florida.

Since I know most of my readers are from the US…I am going to answer this from that perspective. For most, this will be a great weekend to get your kids involved in learning about storms, preparation, and mitigation without scaring them. This is also a great exercise for all of us. Remember, we have three months of hurricane season left to go. Go ahead and stock up on your non-expiring supplies like batteries and water. Go ahead and review your evacuation zones and have a plan in place. There is still some potential this storm could strengthen a bit in the Gulf of Mexico early next week. For that reason, you can prepare for a category 1 (75-95 mph) system. Don’t go out and buy storm shutters and plywood that you wouldn’t normally buy. This is not that storm, at least right now.

This is a flood risk. You may want to evaluate your mitigation options for flooding, especially if you were flooded earlier this month. Sandbags are being offered in most counties. Also, prescriptions can be ordered a bit earlier during the state of emergency. That could be useful if you were flooded in earlier this month. If you live in low lying areas such as Shore Acres, South Tampa, Cedar Key, or in an area that has recently flooded earlier this month such as Fort Myers, South Orlando or Elfers…it might even be a good idea to take a staycation with some hotels offering lower rates. If you have kids, that might be a good exercise. This is not an excuse to skip out on work, at least not yet.

Forecasts often focus on winds. Now that we’re nearing the end of the Floridian Rainy Season, you’ve probably already had winds of 50-70 mph in one of our sea breeze storms this season. Winds in Erika will be LESS than in those storms. This will be a literal breeze in this respect. But do expect a few days of on and off rain and thunder. 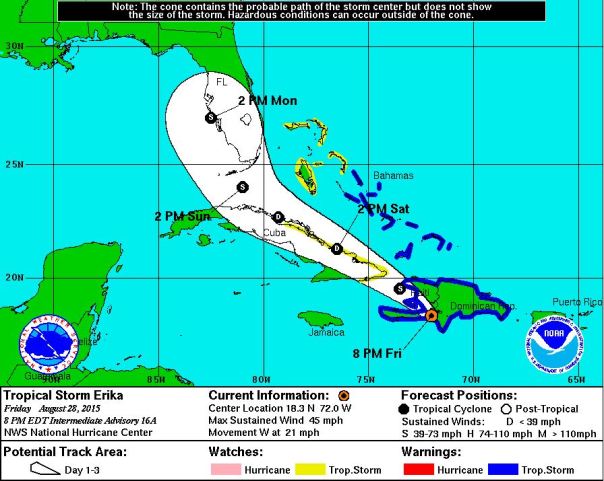 The forecast is for whatever is left of Erika to move into the Florida Straights or over Cuba tomorrow afternoon, assuming Erika does anything expectedly. Impacts to Florida could begin Florida night. Erika will likely get into the eastern Gulf of Mexico early next week, meaning that most of Florida will be on the most intense side of whatever is left. There is a trough that has dug down into the central Gulf of Mexico that will act to at least somewhat block any farther westward advancement. This will limit how far west this system can go. At some point the forecast will stop going westward. Recent dropsondes in the central Bahamas show roughly 20 knots of wind shear that should keep any intensification that tries to begin at bay tomorrow.

PREPARATION is key. Go to http://www.floridadisaster.org/ and get a plan. Be weather ready so that you can ride out this storm.

I am more than willing to take questions over the next couple of days. Please tweet me those questions @JonathanBelles