← First Freeze of the Season is Just One Day Away!
The Winds of Change Have Begun. The Second Freeze of the Year is Expected in Northern Florida! →

Season’s are Changing and Cooler Temperatures Are On The Way!

It’s almost astronomical winter, and the seasons will finally change….or at least feel like it. It’s been rather tranquil as of late with only a few strong storms in the panhandle and some high winds yesterday. That system was the first sign of a pattern change. Another storm is on the way which will bring in snow to the midwest, southwest, and northeastern US. The next system is building in the Rockies, and a trough is digging along the left coast. Below is a map of wind speeds at 300 mb, or in the upper levels of the atmosphere, where brighter colors illustrate higher winds. The zone of highest winds is the jet stream, which will continue to dip southward and push eastward over the next 48 hours. The fun begins when the trough reaches the east side of the Rocky Mountains, where the layer of low pressure will reach down to the surface and spin up. That low pressure system will grow and move toward the east. 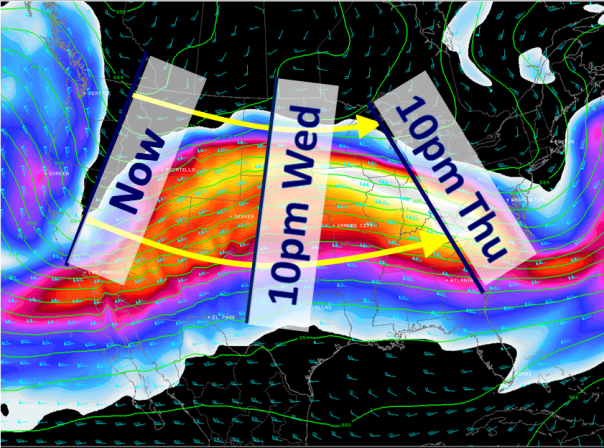 Clouds will begin to increase in northwestern Florida late tomorrow into Thursday at the low levels of the atmosphere. Aloft, the picture will become a lot more interesting. On Thursday, the jet stream will contain winds at 25000 ft or greater of 60-100 mph over the deep south. Most of these higher winds will stay north of Florida, but with added energy some of these winds could work their way down to the lowest layers of the atmosphere in the way of severe weather as the cold front pushes through with moderate to strong thunderstorms Thursday night. For this reason, the Storm Prediction Center has outlined much of the panhandle and southern parts of Alabama and Georgia in a slight risk of severe weather. At the surface, expect a breezy Thursday with rough seas in the unprotected waters of the Gulf.

The main surface low pressure system will be moving northeastward by the end of the week, which will cause large snow totals from Iowa to Maine. As the systems moves away it will take its energy with it, and thus much of the severe weather will also end by Friday morning. Don’t cancel your Friday afternoon plans if you are in Florida! I think the cold front will push through the Keys by noontime on Friday, which should allow clouds to clear by late afternoon. High pressure will begin settling in by early Saturday, which will allow temperatures in the northern part of the state to drop below freezing. I think the freezing line may drop well into interior central Florida possibly all the way to the Florida Turnpike. Below is the 00Z gfs for tonight…valid for early Saturday morning. The dark blue line is the freezing (32°F) line:

I’ll be watching this for the rest of the week, and I’ll be tweeting @JonathanBelles as well. Follow me there, and I’ll see you soon! I’ll be posting here soon as well. Good night!

← First Freeze of the Season is Just One Day Away!
The Winds of Change Have Begun. The Second Freeze of the Year is Expected in Northern Florida! →