← Tranquil Week Ahead
Season’s are Changing and Cooler Temperatures Are On The Way! →

First Freeze of the Season is Just One Day Away!

The first freeze of the season is on it’s way for the northern third of Florida and much of the rest of the southeast. The leaves here in Tallahassee are changing to shades of garnet and gold, and that change will likely accelerate as we head into the last week of November and even more-so December. This week, two cold fronts will bring change to the southeast, and the first one has sliced the region into warm and cold. As I type, the cold front has pushed through Charlotte, Atlanta, Pensacola and New Orleans and continues to move south and east. This first front will clear Florida by Sunday while the second storm system organizes east of the Rockies. Neither system seems organized enough in the models to produce severe weather. In fact, tonight’s system should go largely unnoticed in terms of precipitation. Overnight boaters may want to beware of a few showers that may form to the south and west of the Florida panhandle and central Gulf coast. Temperatures will begin fall after sunset on Saturday, and they will plunge into the 20s and 30s across the region with the freezing line pushing into the coastal areas of the eastern Gulf coast and all the way to the coast along the Atlantic north of Savannah. High pressure will settle into the area early on Sunday before pushing east for the beginning of next week. The current freeze watch as depicted by the NWS is redrawn below:

I think that even those locales that do not seen a freeze will see frost on Saturday night and Sunday morning. Those locations that do see a freeze on Sunday morning will likely see frost on Monday morning. Areas to the north may have trouble with frost formation due to the expected dry air that this first front will bring, however locations closer to the Gulf should have sufficient moisture for frost both mornings.

Temperatures should rebound as high pressure shifts east and the next storm system begins to take shape on the lee side of the Rockies. From Sunday into Tuesday temperatures will return from 15 degrees below normal to the climatological average. Moisture will also return as well, and rain chances will build as the next storm system slides through the area on Tuesday night. No severe weather is expected with the second system either.

Your gameday forecast for FSU vs. UF is rather quiet with the only issue being the rather chilly temps toward the end of the game and afterwards. If you have plants that are cold-sensitive, make sure you either cover them or bring them inside tomorrow night before dark.  Your entire 5-day forecast for Tallahassee is below: 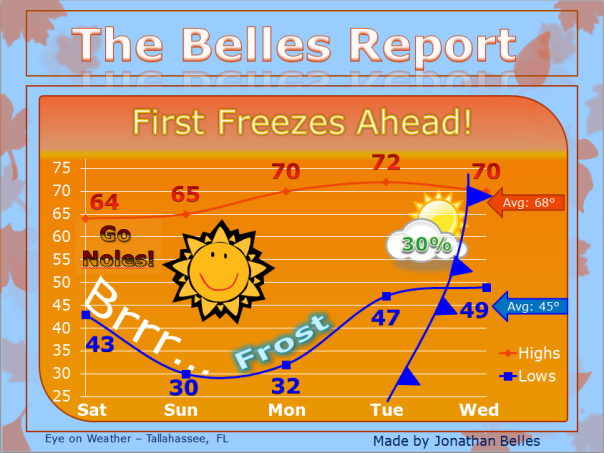 ← Tranquil Week Ahead
Season’s are Changing and Cooler Temperatures Are On The Way! →