← Flirting with Freezing in North Florida. How Low Will It Go?
ARRR Ye Ready for Gasparilla?! →

Freeze Warning in Effect Overnight. Halos, Contrails, and a Conjunction too!

A freeze warning will be in effect after 3am for most locations in northeastern Florida, the eastern Florida panhandle and southwestern Georgia. This will be a light freeze for everyone, and although I do not expect widespread damage from this event, the possibility exists for some damage to cold sensitive plants. Temperatures will fall into the upper 20s in Georgia and the low 30s to near freezing in Florida. No freeze is expected near the coast or in the larger metros of Florida (Jacksonville, Tallahassee). You should bring in your pets if they are outside even if you are not in a freeze warning for tonight. You will also want to bring a decent jacket if you have any early errands, classes, or work. Frost is a probability in wide open areas and areas where wind dies down to a calm. In Tallahassee, I do not think the wind will go calm long enough for frost to form on anything more than sheltered cars and any other metallic surfaces.

All of the shaded counties are in the freeze warning tonight:

Also, if you missed the halo today or last night, here is a graphic that I put up on twitter last night along with today’s picture of the day. The halo around both the sun and the moon is due to the bending of light as it hits ice particles that are located where planes fly at the top of the weather making atmosphere. They form sheets of clouds called cirrostratus clouds, and they were caused by a cold front that passed though the area last night. In the top graphic, you can see a line of clouds that pierces the sun. That line was caused by an airplane that just happened to be in the right place at the right time. The line of clouds is called a Contrail, which is caused by the airplane’s lift. The airplane’s lift causes moisture to condense and form a cloud that otherwise would not have formed. You’ll also see Jupiter in the bottom graphic, which was in an orientation with the moon called Conjunction, which basically means they were aligned rather close together. 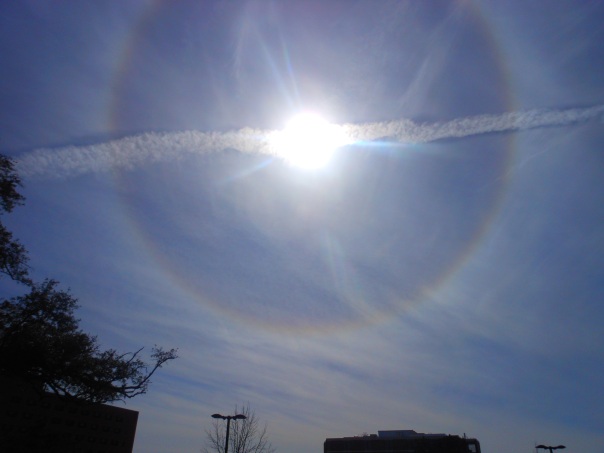 ← Flirting with Freezing in North Florida. How Low Will It Go?
ARRR Ye Ready for Gasparilla?! →