Dorian Keeps Gasping For Air, and Flossie Strengthens: Impacts to the Greater Antilles, Florida, and Hawaii

The remnants of Dorian/current 91L have been doing quite well all day today. Throughout this discussion, I will be using 91L and Dorian interchangeably. We did not see Dorian peter out during the day even with impending shear in the forecast. What I believe has happened is that the upper level low pressure system has lifted in the atmosphere, and all of the shear that is/was expected has lifted into the highest levels of the weather atmosphere. Dorian is not the deepest system, and thus it likely is not feeling the effects of that higher shear. Dorian is showing some signs of shear, especially on the western side where shear is highest. If you look at the satellite loop below, you will see the clouds on the west side of the image are rather square shaped or flat. You can also notice that some of the taller (whiter) cloud tops on the western side are more wispy than on the east side. Both effects are due to shear.

What I expect to happen over the next two days is that upper level low will retrograde, or move northwestward, and weaken. Today we saw an anticyclone, or shear/dry air shield, build nearly on top of Dorian, and I expect that to be a semi-permanent feature. Those two things combined may allow for slow formation of 91L over the next three to four days. Currently, the National Hurricane Center gives 91L a 50/50 shot at regaining it’s title of tropical storm. Winds in a recon flight and on an ASCAT (wind satellite) pass earlier today showed that Dorian still has winds to gale force on its northern side, so if Dorian can close off a low-level center, it will likely jump straight to tropical storm status.

The Forecast and Impact:

The forecast models currently bring a weak tropical storm, or tropical storm wind producing low pressure system, to the southeast coast or Keys of Florida in about four days. This will likely be more of a rain maker than a wind maker, however impact will have to be nailed down for the US in a couple days. For those of you in the Greater Antilles: Expect waves of 6-8 feet on the north facing shores on Monday in PR, Tuesday in Hispaniola, and Wednesday in the Bahamas, Cuba, and also along the east coast of Florida. Expect scattered storms, mainly off shore of the greater antilles following the timeline above. If you are in the Bahamas, the worst day will be Wednesday in terms of rainfall, wind, and waves.

Below are the latest models for both track and intensity: 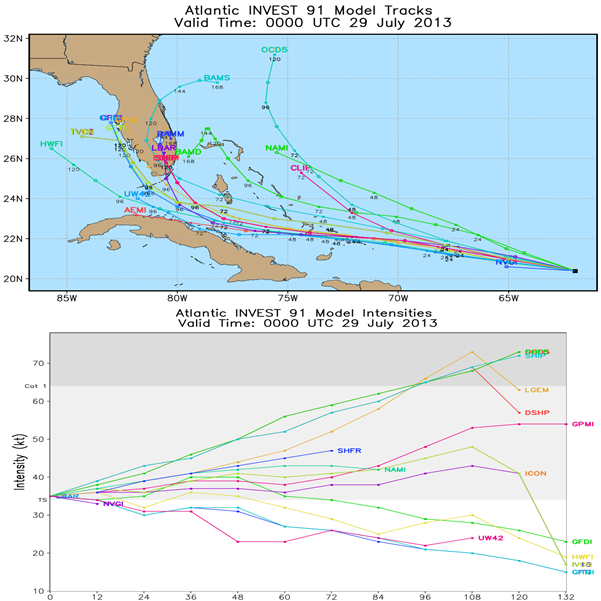 Flossie unexpectedly strengthened earlier today well to the east of the Hawaiian islands, which forced the Central Pacific Hurricane Season to increase the expected winds on the Big Island and points east. Tropical Storm warnings have been issued for most of the islands, which means that winds greater than 40 mph are expected for most of Hawaii. A tropical storm watch has been issued for the remainder of the islands, which means that winds greater than 40 mph are possible over the next couple of days. Surf is already increasing on the islands, and will likely increase further  over the next day or so as Flossie approaches from the east. Expect waves similar to that of a winter storm. Heavy rainfall is a likelihood for all of the islands, especially in the higher elevations where as much as a foot of rain may fall. Elsewhere, the lower elevations can expect 4-8 inches of rain.

Flossie will make landfall on the eastern shores of the Big Island around noon on Monday, and from there Flossie will weaken. That does mean that the impacts will immediately wane, but the worst impacts (wind and rain) will be felt in the eastern islands. Below is the current forecast track from the Central Pacific Hurricane Center in Honolulu: