A long night is ahead in coastal North Carolina where winds above 75 mph will reach a good portion of that area. Tornadoes have been possible across northeastern North Carolina this evening, and the threat for tornadoes continues into tomorrow morning ahead of Arthur. A tornado watch is in effect for most of eastern NC for this threat until 8AM. Winds near 100 mph are visible on radar near Beaufort and Harkers Island, NC coming ashore in the northeastern eyewall.  Gusts are possible well over 105 mph. Please see official sources (local officials and the NHC) for official information. Landfall officially came at 11:15pm near Beaufort, NC. Current information from the NHC is as follows: 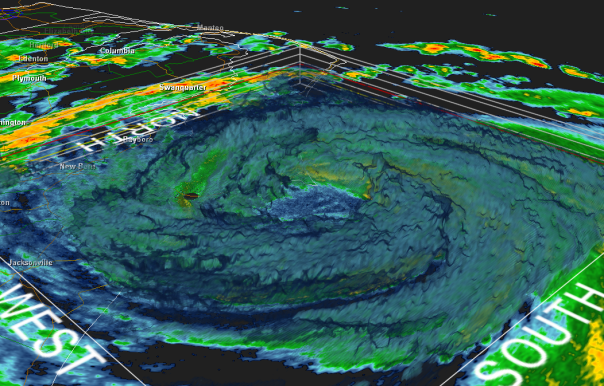 Landfall is occurring now near Cape Lookout. The strongest rain band is off shore with winds topping out near 100 mph in the southeastern quadrant. No major changes have occurred in the recent few hours, but some deterioration is possible why Arthur is overland. Something interesting is occurring in the eye, but that information can be seen at the  end of this post.

Arthur will track over eastern North Carolina overnight bringing the impacts mentioned above. Small deviations in track is possible due to friction with wobbles. Arthur should be moving away from North Carolina around sunrise tomorrow morning. Due to enhanced interaction with land, intensification is not expected over the next 24 hours. After that time, the trough we discussed yesterday will be interacting with hurricane Arthur and weakening should commence. The balancing act between weakening induced by the trough and intensification due to acceleration should allow slow weakening off the east coast of the US. Interaction with Nova Scotia late on Saturday will commence the final weakening trend.

Breezing over radar imagery earlier I saw what appears to be birds or bugs stuck in the eye of Hurricane Arthur. I said appears because there is no official confirmation on this, but this is how I came to that information. Current reflectivity radar, and snapshots from earlier in Dual Pol. High ZDR means that the radar is picking up flat horizontal objects and low CC means that the objects are likely not rain. What is long, flat, and not rain: My first thought was birds with wings, but birds or fluid trapping are also possible. Opinions welcome! 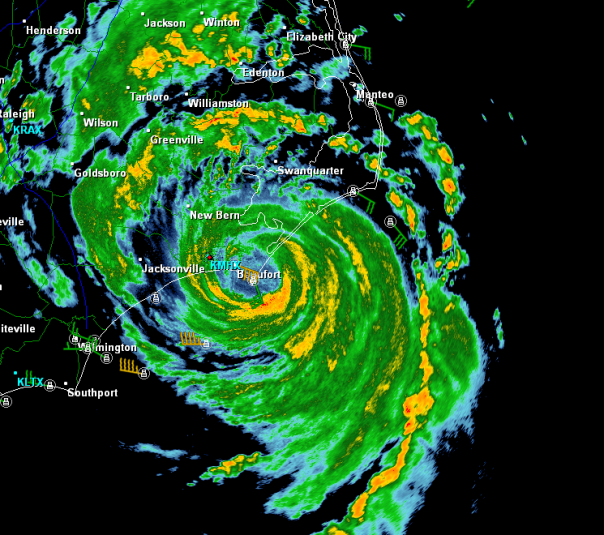 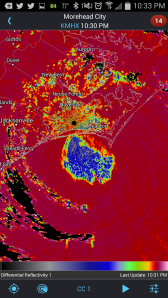 Correlation Coefficient in the eye. 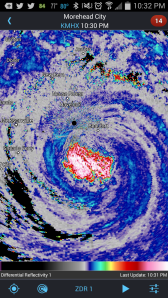 ZDR in the eye.