← Tropics are Creeping to Life: When Does Ana Form?
Ana is Transitioning to a Tropical Storm: Rainy Mother’s Weekend on the Beaches Shaping Up →

Ana is Coming: Messy Mother’s Day Weekend in the Carolinas

Although Invest 90L has not yet officially been upgraded to Ana, the impacts are very similar to what they would be with a name. The hurricane hunters have been in this system twice today. During the first flight, and combined with satellite data, it was determined that 90L’s core was not tight enough and did not have strong enough sustained winds to be deemed a subtropical storm although it did have tropical storm force winds well removed from the center. Throughout the day convective boosts have been persistent on the western side of the main center of low pressure. Yesterday’s non-tropical low moved away and the strong rain band to the east is fading.

Although tonight’s recon mission is ongoing, it has already provided valuable insights. During the first pass, recon found a warm core (+1-2°C from outside temps) and tropical storm force winds 70+ miles away from the center. One convective burst continues to assist in the enhancement of this system, but dry air lurks not far away. Winds are slightly weaker now compared to during the first pass. Meager SST support, and light to moderate shear will allow for some slow growth as long as that dry air remains outside of 90L’s core. As of 9 PM, another convective burst is occurring over the NE side of the invest, but drier air continues to approach.

In the water vapor imagery above, you can see a very long band of abnormally dry air stretching from southern Canada into this system. Tonight’s JAX sounding is comparatively more moist in the mid-levels compared to last night, and much of Florida is drier than last night. The CHS sounding is resoundingly more moist due to the rainfall lurking off shore and outflow coming from the system. Progress of the dry air into the system has been slow, but does seem to have slowed down the vertical growth of moist convection this afternoon especially on the eastern side. Assisted divergent flow on the western side remains the only outflow channel associated with the center of this system. If that outflow channel can continue to grow, as is signaled by the meridionally aligned convection in Georgia pushing westward, that dry air source may moisten. That would take a day or two, and would not stop the dry air that is already over Florida and the Bahamas. Convergence at the surface remains disorganized, shear seems to be on the downward trend, and surface vorticity (spin) remains strong.

I believe that the strength of this system will be strongest within the next 24 hours. Current hires models continue to indicate weakening tomorrow due to dry air being wrapped around this system. Vertical cross sections of the HWRF/GFDL from this afternoon suggest that this dry air may not go anywhere anytime soon, but any slowing of this system over the Gulf Stream may assist hot tower development. Small increases in sustained winds are possible through tomorrow if the dry air stays far enough away. Most models show modest intensification before 90L moves into the cooler shelf waters and onto land this weekend. I have to somewhat doubt that trend based on recon this evening. 00Z SHIPS has very modest intensification through the next 48 hours. 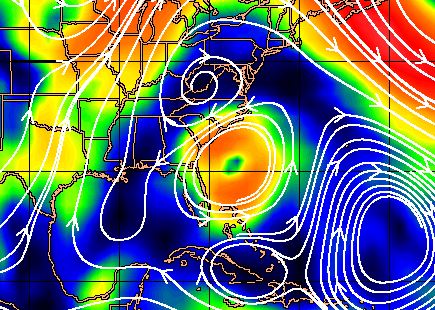 Current steering currents show that there won’t be much motion for the next 24 hours. After that, the weak high pressure system will move out of the way and allow still slow motion toward the SC/NC coast Saturday evening or Sunday. This slow motion will allow for some very heavy rainfall and breezy conditions. Finally, the low pressure system that is expected to cause a two-day tornado outbreak in the central plains will give 90L a final shove to the northeast.

Spaghetti models for this evening. Data does not include this evening’s reconnaissance data. Courtesy Tropical Atlantic

Dry air and the Gulf Stream will have to duke it out over the next 24 hours. What will most likely happen is a plateau in strength or modest intensification. Diurnal maximum may help with thunderstorm activity overnight. The impacts in the Carolinas will be the same: a couple of days of breezy/rainy days that could cause flooding and headaches for those going out for Mother’s Day. I fully expect an upgrade to a subtropical storm at 11 PM tonight, and a transition closer to tropical by the end of the week. Stay tuned with me on twitter @JonathanBelles for recon/NHC updates.

← Tropics are Creeping to Life: When Does Ana Form?
Ana is Transitioning to a Tropical Storm: Rainy Mother’s Weekend on the Beaches Shaping Up →