I hope you all have stayed dry this week, although I know the chances of that are pretty low…especially in Pensacola!

I have just finished going over my forecast that was made a little over 5 days ago about the drenching that was about to come on through.

The Good: I did relatively well with the southern two-thirds of Florida, with up to 8″ falling east and north of Tampa Bay and the Keys stayed dry. Although I was expecting a different synoptic outcome, the numbers for this area came out the same. The summertime pattern has returned for this area with interior storms likely over the next few days.

The Bad: Where I began to go awry was with the end of the forecast period, when the stationary front decided to creep back north and drop 5-10″ from Perry to Jacksonville.

The UGLY: As the stationary front creeped back north, it took the moisture ploom with it, and dropped darn close to two FEET of rain, which is underestimated here by radar. I fully expect the cocorahs station in West Pensacola, which registered 21.70″ this morning, to top 25″ when the next reading comes in tomorrow morning. When the stationary front pushed north it gradually gathered energy from the north and developed into a small meso low, which only added to the disastrous rainfall totals in Escambia county, Florida. The stationary front turned into a warm front and a powerful cold front, which produced a squall line and at least one possible tornado in southern Alabama and numerous severe wind reports. This front has now lost its punch, and its energy will retreat to the northeast letting soggy areas dry out.

YOUR EYE: Today I was sent a ton of pictures of the wet weather and flooding in the Pensacola and Biloxi areas, so I have gone ahead and created a new page that appears above under “Your Eye”.  This section will continuously be updated as pictures come in. My goal with this new section is to focus on YOUR weather how YOU see it, and I encourage everyone to send me pictures through twitter @JonathanBelles. I hope to see this new page a success. Here are a couple of pictures that were sent to me by Jeri Lynn Schwietert and Kendall Stidham: 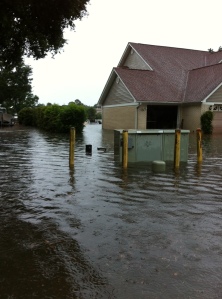 The computer models are beginning to buzz once again for another possible area of interest in the northwestern Caribbean or southern Gulf of Mexico.  There is a loose agreement pointing toward something sturring around next Sunday. This is NOT something to get excited about, but I do think that with the climate parameters in place (MJO and generally lower pressures) and a hint of something on the models that the window opens to the tropics on Saturday June 16th. This is only something to watch for now.