A rare 5am upgrade has come for the far eastern Atlantic invest 98L. This system has formed closer to Africa than the Caribbean. Increased thunderstorm activity and continued organization is the main reason for the upgrade. The trend among the models over the last couple of days has been for more strengthening and a stronger Bermuda High. That Bermuda High is what will guide TD 4, or what will likely be tropical storm Dorian, west-northwestward across the Atlantic battlefield through the dry Saharan Air Layer and through higher shear. TD 4 has a very well-developed “pouch,” which is acting to keep the joey safe from the surrounding dry air so far, and looks to do the same for the next 2 days.

The official numbers from the National Hurricane Center are as follows:

The first visible images are very telling as to the reasoning behind the upgrade. This system looks very good this morning. Imagery is from EUMETSAT: 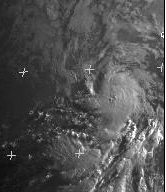 The first official track guides TD4 WNW through the Atlantic to very near the northern lesser antilles by day 5:

The forecast battle with this one will be intensity as there are a lot of factors in play with this one. We have plenty of time to watch this system, so I will post on it either later today or tomorrow.  As always, you can follow me on twitter @JonathanBelles for more frequent updates.