← Tropical Depression 4 Forms: Threat to Land Looms
A Day of Ups and Downs in Dorian’s World →

Dorian underwent a minor intensification stage last night, and has held a steady state this afternoon. Weaker tropical systems often intensify during the overnight hours since that is when the upper atmosphere cools the most. The difference between the cold, variable air aloft and the warm ocean below is what sustains systems and/or allows them to strengthen and organize. Thus, the colder the upper atmosphere, the bigger that difference. This afternoon, Dorian moved into slightly cooler water, an environment with low shear, and a relatively moist atmosphere.

I believe that the overnight hours may allow for better organization, and maybe some slightly higher winds. The overall trend over the next 24 hours should be a downward trend in winds and an upward trend in pressure due to slightly cooler waters and proximity to the Bermuda High. Temperatures have warmed in Dorian’s path, however sub-26C waters should stall any intensification past tomorrow morning. The synoptic map is below: 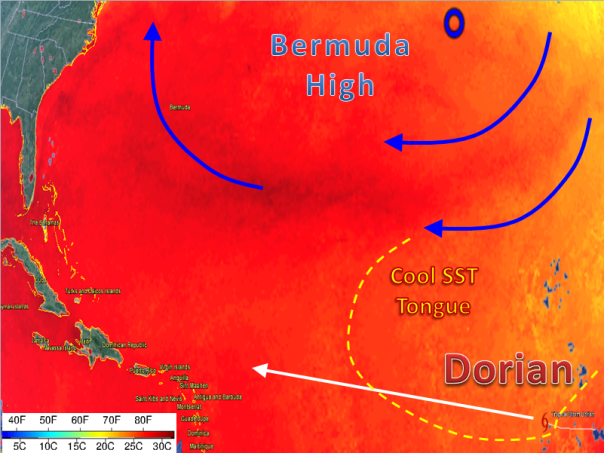 Track is the easy part of the forecast, with an emphasis on easy. See the current intensity models below: 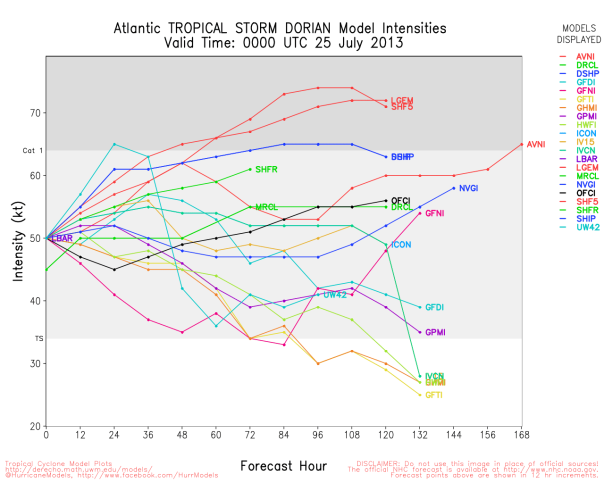 With just a few factors in place, the models are all over the place in terms of forecast intensity. That makes this part of the forecast a very low confidence forecast. The forecast thus far has been verifying on the more intense side of the models. In other words, Dorian has been stronger than the consensus so far.

An early look at impact:

As Dorian nears the northeastern most lesser antilles, it could possess winds anywhere between 45 mph and 70 mph. I think that most of the highest winds and rains will be well to the north of the islands due to high track forecast model agreement, however there are a number of days left for this to change. Most of the impact for the northern lesser antilles will be seen on Monday, and on Tuesday for the greater Antilles and the Bahamas. More talk of impact will come over the next few days, but if you do not have your storm kit ready, you should begin preparing. If you are not impacted by this storm, there are 4 more months of hurricane seasons left.

Climatology: Dorian is one of the farthest east forming tropical cyclones in the month of July, and may defy the odds in its future track. The NHC keeps this storm much farther south that all of the other storms that have formed in the eastern Atlantic, which may bring it closer to the land that most other storms. With the formation of this fourth storm, the 2013 Atlantic Hurricane Season is now climatologically ahead of schedule by one month. This is not an indicator of how the rest of the season will go, but just an interesting face.

In other news, 99L formed today well to the east of Bermuda. The current models bring 99L very close to Newfoundland in 72 hours. This will be something to watch until then. The NHC has given it a 20% chance of development within 48 hours.

← Tropical Depression 4 Forms: Threat to Land Looms
A Day of Ups and Downs in Dorian’s World →