A dry day in Florida in the third week of June and the last day of Spring in an unwelcome sight to the parched soil in North Florida and smokey skies of Duval.  Unfortunately, the only skies to see any water being wrenched out of the heavens may be in Alligator Country and the WPB/Miami metros on your  Tuesday.  The models are insisting that much of the Gulf Coast will see a large impulse of moisture through the first few days of Summer.  The setup is a rather complex one, and the models are using three different sources of moisture to raise our rain chances to 40-60%.  The first is the batch of Gulf Moisture that was in the western Caribbean during the last post.  The tropical wave has since fallen apart, but its moisture remains with some added help from Hurricane Beatriz in the eastern Pacific.  This moisture is poised to move to the north slowly.

The second source is a spring-like storm system across the central plains.  The low dropped up to 40 tornadoes and a lot of wind from Nebraska to Texas just on Monday. The storm system will slide eastward into the Great Lakes and then into New England. One of the models I saw tonight brought a front well into Central Florida before it died out, which during the month of June is nearly unprecedented.  In my opinion, I really don’t believe that this front will make it into Florida at all, but if more models join I may reconsider.

What Spring may try to bring to Florida will enhance our Summer-time showers. All of the models agree that the Precipitable Water, or the amount of moisture in the atmosphere from the ground up if all of the water was dropped from the skies, will likely top 2″ during the last half of the week.

Below I have posted a Water Vapor shot from earlier tonight showing the three sources of moisture I mentioned above. 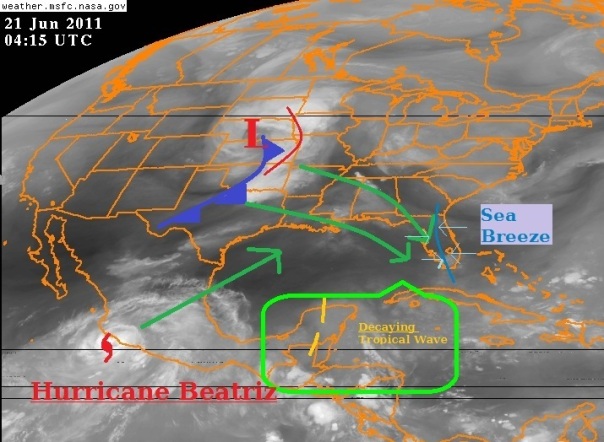 Preliminary, rain chances are 50% at a minimum for almost the entire state. Mother nature has finally listened to all of our rain dances along the Gulf Coast. I’ll be posting more this week as I know more about the situation, but until then follow me at @JonathanBelles on twitter and follow my rss feed by clicking the icons above. Also, if your grass gets a little bit greener during the next few days, send me a picture and I will post it here or on Twitter.