Bertha is a Tropical Wave. Heavy Rain Likely In The DR/Bahamas Tonight Into Tomorrow

(Updated 11:35pm ET) Big Bertha bit the bottom of the barrel today. It is arguable that Bertha opened up into a tropical wave some time yesterday before the 11pm advisory, and the hurricane hunters only confirmed that theory today. ASCAT added to the evidence this morning. In the image below you can see winds mainly blowing from the ENE toward the WSW without even a hint at west winds. By definition, and from a pure meteorological standpoint, Bertha is no longer a tropical cyclone and hasn’t been since this morning. Let me stress that impacts from Tropical Wave Bertha Are No Less than for Tropical Storm Bertha!

The NHC continues to keep Bertha as a 45 mph tropical storm, and the latest Official Information can be found below. My professional opinion differs from the NHC. Bertha has likely been retained for continuity by the NHC.

Information from the 11pm Advisory:

As always, consult the NHC for official information!  Impacts:

Forecast cone from the 8pm NHC advisory and forecast wind probabilities from the 5pm Advisory.

Possibility #1: Bertha Reforms and Intensifies  Bertha has avoided the Dominican Republic for the most part, which means the warmer Atlantic waters, lower shear, and moister air will now help Bertha reform. One other element that may assist in the restructuring process is the topography of the Dominican Republic. The NW to SE alignment of the northern DR may help curve wind on Bertha’s western side from the due north toward the SE. That would create west winds, and thus a TC would form once again. This part of the formation process would be a kick start, but it would only last less than a day. The best conditions are about 2-3 days from now, but they really do not become unfavorable until the middle of next week.  This would allow slow intensification.

Possible scenario that may help Bertha reform in the short term. Winds may be curved by the mountain ranges of Hispaniola.
Wave Axis is in orange. Current winds are in red. Future possible winds in red dotted lines. NHC track in black.

The NHC has outlined a new area in their latest outlooks that may be strong enough to absorb Bertha in a couple of days. This area is a surface trough, and the NHC has the chances of this disturbance becoming anything more at 10% though 5 days. This system will follow the winds that will also steer Bertha away from the mainland US. This currently does not seem likely since Bertha should be stronger as it passes by on Monday.  I am interested to see how that 2nd system opens a weakness in the high pressure system and moves Bertha.

In the Short Term:

In the short term, the effect of friction from the northern ranges of Hispaniola and DMAX seem to be helping Bertha throw up convection. The first possibility seems much more likely than the second, however we may have to deal with the shear from the 2nd system on Monday. Initially slow reformation should take place before reaching the Bahamas tomorrow and then as we get into the Atlantic we may see a slightly faster intensification. Hurricane Hunters are out tonight north of Hispaniola/DR looking for further information for the models, and eventually for a west wind and Bertha pulls away from the DR. We will likely have to wait until mid to late morning for confirmation of whether or not this wave has a center or not. That confirmation will come from either recon, from surface observations in the DR or the Turks and Caicos Islands, or from visible imagery. 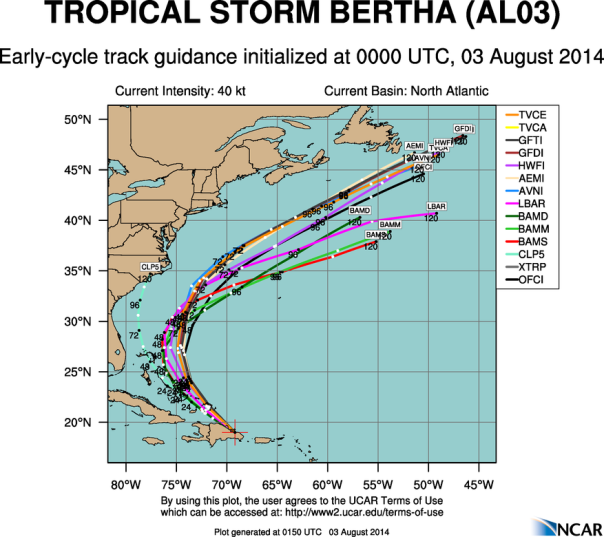 New at 11: A short time ago, the Hurricane Hunters have found some VERY weak (10 kt) west winds. Pressures in that region, north of the Dominican Republic and to the NE of the 11pm position, are pretty high. I think that area has a better chance of being an extension of the tropical wave rather than a center. Lighter winds are generally more variable. There is plenty of thunderstorm activity in that area, so this could become an area where a new center may form. Winds are also higher to the northeast of this area. Stay tuned on twitter.