← Bertha is a Tropical Wave. Heavy Rain Likely In The DR/Bahamas Tonight Into Tomorrow
Bertha Becomes a Ragged Hurricane and We Start Looking West →

Bertha Collects Her Belongings and Winds Up Stronger

(Updated: 10:50pm) As Bertha has moved away from the Dominican Republic and the southern Bahamas, it has quickly organized and has quickly intensified. Data is flowing fast at multiple levels within Bertha’s newly organized center of circulation from reconnaissance. That data suggests that surface winds could be as high as 60 or maybe even 65 mph. A recent dropsonde found winds of 65-68 mph at the surface. The best estimate has winds closer to 65 mph at this time based on more continuous observations. Should we see more high winds, that estimate might have to be higher. This increase in winds seems to be more from reorganization than loss of data over/near Hispaniola. We are now losing surface observations as Bertha is moving away from land, so these planes are the best resource we have. We should see some higher waves  along the entire east coast of the US this week, and in Canada toward the end of the week.

Official Information from the NHC at 11pm:

Last night we talked about two different forecast possibilities, and as expected possibility number one has prevailed. Bertha has recollected itself. The rest of the forecast carries a moderate to high confidence. A typical track in this area is around high pressure to the NE, and an unseasonal trough on the east coast will help that motion off toward the north and northeast. That trough should also help fan Bertha by opening up an outflow channel, which removes mass from Bertha’s center. This forces air to collect at the surface like a vacuum and that air all has to go upward, and thus pressures are lowered. Another trough to the northeast has already created one outflow channel that has already started to increase upper divergence. You can see this fanning effect on the IR satellite above to the NE/E of Bertha.

Shear is expected to remain non-prohibitive as Bertha moves towards the north over the next 60 hours or so, and warmer water temperatures should be able to pump up convection over the next 48 hours. Mid level humidity and the above outflow channels should allow a steady intensification over the next 1-2 days. On Wednesday, as Bertha moves away from the mid-Atlantic coast, Bertha could attain a peak intensity of hurricane strength as these favorable conditions culminate. Roughly half of the intensity models bring Bertha up to hurricane strength, but with recent increases in intensity seen in recon data those odds may increase tonight into tomorrow. In either case, the trough should protect the US from Bertha, but we’ll have to talk about Canada in a day or two. Shear begins to pick up Wednesday night or Thursday, and thus the intensity should decrease after that time. 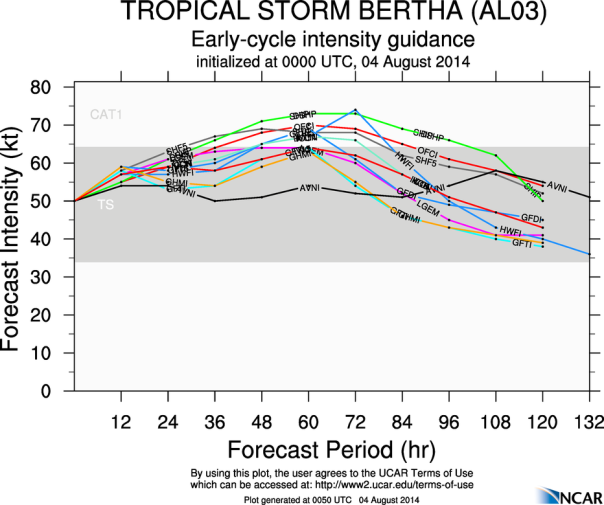 As I have done on the last couple of nights, I have updated this post following the 11pm update from the NHC. I will post any pertitent recon updates tonight on twitter @JonathanBelles

← Bertha is a Tropical Wave. Heavy Rain Likely In The DR/Bahamas Tonight Into Tomorrow
Bertha Becomes a Ragged Hurricane and We Start Looking West →