Hawaii is Preparing for a Double Threat: Hurricane Warnings Hoisted

“Gov. Neil Abercrombie today signed an emergency proclamation in anticipation of the arrival of two tropical cyclones in Hawaii.” – August 6th. With this statement, the state of Hawaii opens their emergency reserves, emergency funds, and the suspension of some normal lawful avenues in the case of emergency. This emergency declaration is in advance of Hurricanes Iselle and Julio, which will begin to impact the island chain tomorrow morning. You can read the entire declaration here: http://www.scd.hawaii.gov/documents/RELEASE%20Emergency%20Declaration%208-6-14.pdf

Hurricane Iselle continues to approach the Hawaiian islands. Dry air seems to be keeping its distance. Another hurricane lurks to the east of this cyclone.

Both squadrons of the hurricane hunters (NOAA and AF) are also lending all of their support to Hawaii over the next week. In a statement on the AF Hurricane Hunter facebook page this evening, they state that they will be based out of Pearl Harbor until around the 13th of August for both storms. The NOAA G-IV will be based on Oahu for much of the week. There have been some fantastic photos from the NOAA Hurricane Hunters on their facebook page at https://www.facebook.com/NOAAHurricaneHunters

A Hurricane Warning has been issued for the big island of Hawaii in advance of Iselle.

Both of these systems will come very close to the island chain between tomorrow and next Monday. At this point, Iselle is expected to be closer than Julio on their given path. Both systems will follow a similar, and parallel, path from east to west. Conditions are expected to go downhill on the eastern islands starting tomorrow morning.

Impact of Both Storms:

Combined probabilities that winds greater than 40 mph could impact the outlined area. Winds could be much stronger closer to the center of of both systems, and these probabilities on the islands will likely go up as the systems approach the islands.

Hurricane Iselle continues to reorganize after the loss of annularity, and the system is beginning to improve in appearance once again. SST’s are marginally supportive of intensification, but shear is expected to intensify as Iselle approaches the islands. Slow weakening is likely as shear increases. Julio on the other hand continues to be affected by the conditions that allowed Iselle to intensify and become annular. Slightly cooler waters and otherwise less favorable conditions with not allow Julio to intensify as much, but intensification is expected. Both systems have a considerable amount of uncertainty for the intensity forecasts. Below all of the intensity models have been compiled along with the NHC/CPHC official forecasts (OFCL/OFCI lines). The time at which each system crosses 155W – the longitude of the eastern shores of the Big Island – are marked in the dark bold vertical line.

This is NOT a weekend to go out on the water in the Hawaiian islands, nor is it a week to plan a whole lot outside. Both of these systems could be deadly and should be taken seriously. It is my hope that these systems are not falling on to complacent ears and eyes.

The last time a hurricane made landfall on any island in Hawaii, was in 1992 on the island of Kauaʻi. This was Hurricane Iniki, and it hit during the filming of the original Jurassic Park. Spielberg and his crew of more than 100 sheltered from Iniki during the last day of shooting. That hurricane came in from the south as most tropical systems in that part of the world do. This combination of two tropical cyclones coming in from the east is relatively rare, especially so close together. 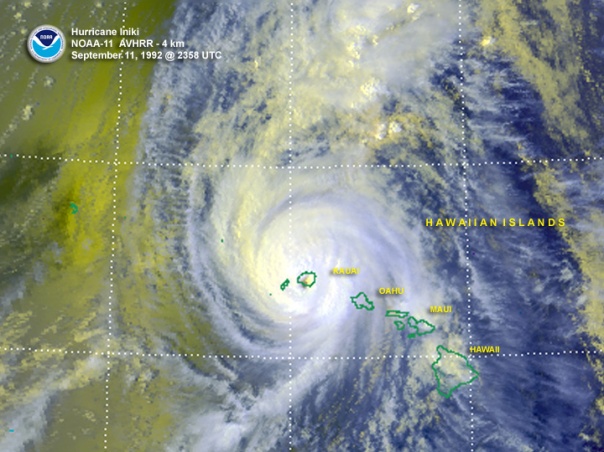 What Happened to Bertha?

Bertha was over taken by the east coast trough this morning and is now being driven by the jet stream that makes up that trough. That makes Bertha an post-tropical cyclone. The processes for development are different, but the impacts are the same. Shipping interests in the north Atlantic may want to keep Bertha in their minds for the next few days as Bertha crosses the north Atlantic toward the United Kingdom.

Take a moment and open up the slam packed united analysis above. There are 4 cyclones of importance in the tropical world in this hemisphere. One of which is about to become a typhoon in the western Pacific. Genevieve is about to cross over the International Date Line, where it will switch names from Hurricane to Typhoon. This is just a change in name and nothing more, but it doesn’t happen all that often.

I’ll be watching all of the above, and I hope you’ll join me @JonathaBelles