← 11pm Bill Round Up
Tropical Depression Bill is Crossing the Red River: Heavy Rain Still Falling in the South Central US →

Bill is Accelerating Across the Lone Star State

Tropical Storm Bill made landfall this morning on Matagorda Island with winds of 60 mph and a 2-3 foot storm surge from there eastward into Galveston Bay. Satellite imagery until recently has been on the sloppy side with some of the western side without deep thunderstorms. Interestingly enough at the end of the loop below (shortly after 7pm CT), thunderstorms completely covered the center. Radar imagery has suggested a well formed center and intense feeder band has developed in the eastern semicircle. That band will likely set up for a flooding situation tonight as it moves ashore. The good news is that according to NWS Houston, Bill is accelerating a bit.

Official Information as of 10pm CT:

Will Friction/Lack of Ocean Weaken Bill? (we’re crossing the bridge!)

A secondary theme of Bill’s forecast has been the intensity forecast after Bill makes landfall. Generally friction and the loss of a sea surface fuel would force a tropical cyclone to weaken once landfall occurs. This has happened so far according to the NHC, but the question now is whether that will continue or not. Rainfall in SE TX and in the Red River/OKC/DFW regions has been excessive recently, and that may help Bill remain a tropical cyclone longer. Past examples of this process are tropical storms Erin and Fay in Oklahoma and Florida, respectively. Many places are still swampy, and that gives Bill a moisture source to feed on. Whether or not procedure at the NHC keeps this thing named or not, this will be a big rainmaker well into the heartland of this country.

Bill will likely return to its roots within a few days by gaining energy once again from an upper level trough, which in addition to the very saturated ground could keep Bill’s organization fairly well kept. A few models have been hinting at this for days. This will only keep rainfall totals high and maybe keep winds up a bit. As we see in the northern Atlantic, we may see Bill actually intensify as it reaches the mid-latitude/baroclinic forcing. This a low confidence forecast. To the causal observer, this will be like a low end tropical storm moving through, perhaps into Oklahoma.

NWS forecast rainfall through Friday at 7pm CT. From WeatherBell.

At this point, the forecast remains the same. Worrisome rainfall totals are forecast by local NWS offices and the WPC has a bullseye of 8″ south of the Dallas/Fort Worth Metro through the weekend. Oklahoma City and Tulsa are not forecasted to see any lesser rainfall than eastern Texas even though it is MUCH farther inland. Bill will be reaching Oklahoma on Thursday. Flooding is VERY likely.

The forecast track is fairly simple. Bill is forecast to round the ring of fire/ Southeast US high pressure system over the next five days. Bill will pass near or just west of DFW tomorrow, east of OKC and near Tulsa on Thursday and then up the northern side of the Ohio River and into the northern Mid-Atlantic over the weekend. In other words, Father’s Day will be messy in the middle Appalachians and mid-Atlantic.

I’ll be updating on Twitter as usual, but I have edited this post with the latest from the NHC following the 10pm Advisory. Remember, if you don’t have twitter you can look for my feed to the right of this post.

Bonus Image: If you look close to San Antonio, you will see light reflectivity tonight. Those are bats coming out this evening. It is not that uncommon to see bats or birds around tropical cyclones on radar, and the San Antonio/Austin area is known for its bats especially at sundown. Also interesting is the development of an eyewall or at least a very strong rainband. High res models continue that feature well into Oklahoma in 36 hours. I would expect some high winds to occasionally mix down in the area of that strongest rain band. Radar still indicates tropical storm force winds above 5000 ft as of 10pm ET. 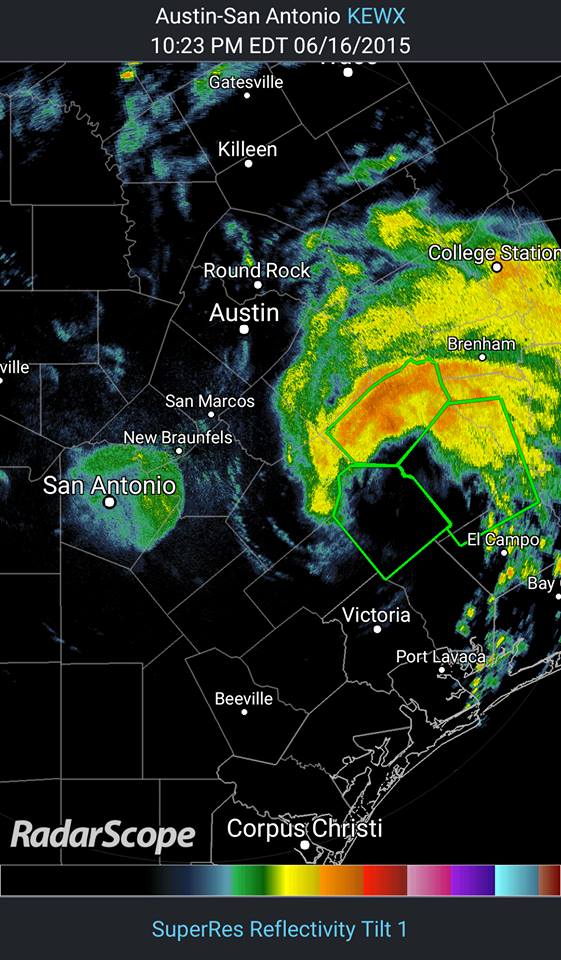 ← 11pm Bill Round Up
Tropical Depression Bill is Crossing the Red River: Heavy Rain Still Falling in the South Central US →