Busy day in the tropics that keeps getting more crowded.  95L became Tropical Storm Franklin today, and 94L became TD 7 within the last two hours.  92L and 93L continue to cross the Atlantic, each with a good chance of development over the next week.  I’ll look at each of these separately below:

Franklin is near the end of his lifespan as a tropical system. A moderate stationary front is forecast to attach itself to Franklin tonight and he rapidly moves to the NE.  After undergoing this extratropical transition, Franklin will continue to accelerate out to see with no sights set on land.

TD 7 is very freshly numbered this evening. It has had a clear spin throughout much of the day, and has blown up enough thunderstorms after sunset that the NHC has gone ahead with a TD upgrade, and it conditions around TD 7 are improving.  I believe that TD 7 will be upgraded overnight to Tropical Storm Gert.  Trudy, as she is a female,  may cause some heavy rain and higher winds in Bermuda over the next few days.  She won’t do a whole lot of damage there, and will recurve out to sea without any effects elsewhere.

Conditions over 92L are becoming favorable rather quickly. We have seen bursts of convection near the center over the last few hours, and this may be our next tropical depression over the weekend. Shear is incredibly low, and the only negative that I can see with 92L is that it has no lower level convergence to force convection upward.  92L does have some dry air behind it, and isn’t too far from TD7.  I think these are both minor, and should not inhibit organization.

Invest 93L has had a hard time since the beginning. 93L is in the middle of the Saharan Air Layer, which is a ceiling of dust that is covering the eastern half of the Atlantic. This one may be the most concerning of the four due to many of the models bringing it into the Eastern Caribbean in a few days.  I’ll continue to watch it over the next week and continue to do updates as necessary. 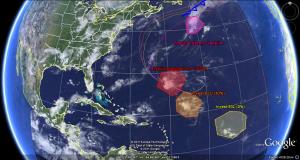 Also, I do want to mention that I will be moving back to Tallahassee (FSU) in a little over a week, so updates for the next two weeks could be more sporadic.  I will continue to tweet ( @JonathanBelles ) during this time with updates.  Good night!