← Caribbean Low to Organize?
Ups and Downs with 94L →

The Caribbean low that was rather disorganized yesterday has organized under a new low-level center just south of Jamaica. The center of the disturbance is located at about 16.4N 77.9W, or about 130 miles SW of Kingston, Jamaica and is drifting to the NNW at less than a mile an hour. The National Hurricane Center designated the low as Invest 94L this afternoon. The winds are estimated at 30mph, although I have a hunch that they are stronger than this due to some of the scatterometer imagery showing rain uncontaminated stronger winds. Pressure remains at 1007mb. 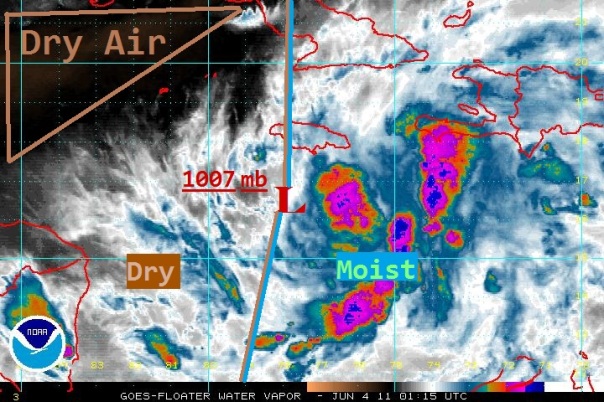 The convection remains mostly off to the east of 94L due to some mild shear at both the mid and upper levels of the troposphere along with small amounts of dry air near the system. That being said, the convective structure is much improved from yesterday with clear banding and layering of clouds. Shear directly over the system continues to fall and an upper level anticyclone is building to provide protection and outflow. Overall passage of air, inflow and outflow, is moderately well-developed with the exception of the western side. Winds near the center are a little slower to organize, but will continue to organize with a more cyclonic flow. Sea Surface Temperatures are well warm enough to support cyclogenesis.

As the first tropical models were run on 94L, some of them were initialized incorrectly or developed obviously too fast (notably the HWRF and GFS). We will probably have to wait until the Hurricane Hunters get into the system tomorrow to get a more definite center for the models to start with. Nonetheless, I believe that the slow motion will continue for the next couple days toward the west or northwest. Steering currents are rather weak, especially if this system develops. I also expect slow strengthening/organization into a tropical depression by the end of the weekend, and if 94L can shoot up some convection over its western quadrant we might see Tropical Storm status reached on Sunday.

All the above said, there have been numerous inches of rain across Haiti, the DR, Jamaica and Puerto Rico the last few days. This has caused mudslides already across these countries and more will happen as rain will continue to fall.  If you are reading from one of these countries, leave me a comment about how you are doing and advice to others, and get to safe ground.  Please be safe!

No other tropical weather exists across the Atlantic except a couple tropical waves. I will be watching the Hurricane Hunters flight at 12:30pm ET as will other members at http://www.storm2k.org/phpbb2/index.php . As a reminder, all official information can be found at the National Hurricane Center. A graphic will be added soon.

← Caribbean Low to Organize?
Ups and Downs with 94L →