Panhandle Damage, Your Forecast, and Your Tropical Update

Happy Mother’s Day to all of the mom’s, grandma’s, and adopted mom’s out there!

Although the weather outside my window is less than sunny, it has been a busy weather day here in Florida and in the tropics today.  I’ll start out first with the low pressure system that has brought tornadic activity and some high winds to the panhandle, and will bring much welcomed rain to the rest of the stay tonight and tomorrow. Below are a couple of pictures from one of at least two waterspouts near Pensacola last night from twitter user @stephenbowersWX:

Thanks to Stephen Bowers for this image.

Thanks to Allen Strum and Stephen Bowers for this picture

There are even more pictures available @StephenBowersWX.  This waterspout did come ashore near Pensacola with a line of storms that developed ahead of a cold front associated with the low pressure system that is pushing through Florida. There was a couple reports of minor damage to mailboxes, fences, and docking near the site of landfall. After landfall, the tornado was not on the ground for long and dissipated and most importantly, this tornado caused no deaths or injuries. There was also some minor flooding associated with these storms, but that since has been alleviated.

This line of storms has since pushed just past Tallahassee, but not before doing some minor damage. Per a report from FSU Weather, there is a downed tree near Lake Jackson, which landed on a house. I haven’t heard if there were injuries there or not, but I will follow up on it to find out. There have also been gusts up to 35 mph across the panhandle, but I expect these winds to diminish as the storm pushes north and east.

The line is currently located from the Big Bend upward into Alabama and Georgia. Most of northeast and central Florida are overcast, so I have some suspicions that when this line makes it to I-75 that much of this rain will have fallen apart. The computer models have been showing this solution for a couple of days, but where I think the models may not hold is with the sea breeze. The NAM and GFS have both been persistent in developing the sea breeze along the interior of the peninsula, but with the overcast skies, the temperatures across the state (and hence the instability) have been held down. A few breaks in the cloud cover are possible, and thus I do think at least coastal counties north of Sarasota will get showers and possibly a storm or two before moving east. It’ll be a race to see if the squall line can make it to central Florida before sunset. I’m putting rain chances at 40% north of the I-4 corridor through sunrise tomorrow morning, and then I think there is a better chance of rain along the interior of Florida south of Gainesville and south of SR 60, with chances there up to 50%.

92L is still pushing up convection south of the Azores. Although the low pressure system hasn’t been exactly persistent, it is looking better this evening.  92L has a minimum pressure of 1009 millibars and the best estimate of winds puts it at about 45mph somewhat away from the center. The cloud pattern and thermal structure seem to suggest that 92L is subtropical in nature. As you can see below, this invest in clearly lopsided to the north. Convection has been popping up on different sides of the system since yesterday with enhanced convection in the outer rain bands, which is typical of subtropical storms. I was investigating the thermal structure of the core earlier today, and most of the heat is in the upper layers of the atmosphere while the lower levels are barely luke warm. The GFS suggests that the window for a subtropical storm designation is open, but not for much longer. As 92L pushes off to the north and east away from the tropics, colder air and colder surface temperatures will slowly choke off storms, and 92L will die. Another factor that will come into the future of this system is very high shear, which is located just to the east of the center of circulation as seen below by the more wispy and ragged cloud tops. I think that 92L has a little less than 36 hours left in order to become better defined in order to gain the attention from the NHC. In their last discussion, they gave it a 20% shot of becoming Alberto during the next 48 hours, but I believe the chances are slowly slipping away. 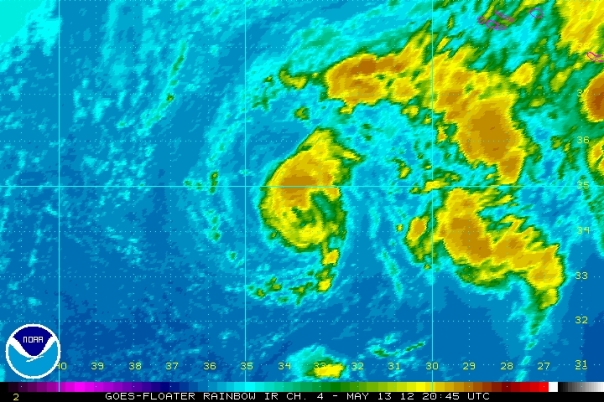 In other news, the GFS and the Euro suggest that a broad area of low pressure will form in the southern Caribbean over the next week or so. With a little better resolution, the GFS develops a weak, but tight area of low pressure near Central America, elongated over the southern Caribbean and eastern Pacific ocean. The likely scenario that may play out is that the western edge of low pressure will tighten up and another invest will form out there, and the eastern edge will ride the central american coastline for a couple of days. Mind you, this possible system is about 7-10 days out, so there is a lot that will change. What we can look forward to here in Florida is a period of rainy weather in 1-2 weeks. I believe if anything does happen tropically natured, it will be between the 23rd and the 26th in the western Caribbean.

Until then, enjoy this day with your Mother’s and enjoy the much needed rain if you are lucky enough to see it.  Have a great day!