Alberto is located about 90 miles east of the mouth of the St. Mary’s River, or latitude 30.7N. I expect that over the next few hours Alberto, which is moving southwest at 6 mph, will move into Florida waters before slowing to a stall overnight. The reconnaissance plane was out this afternoon and found a very disorganized structure, but with winds still of 45 mph. The hurricane hunters found that the low level center and the mid level center were not vertically stacked, but rather leaned over. In the latest NHC discussion, they seemed to be unsure that Alberto had a strong low level base to build thunderstorms from, which seems evident when looking at satellite. He has once again regained thunderstorms over its center, but continues to be very lopsided due to the dry air that Alberto has engulfed on the eastern side. Alberto is slowly moving back into the gulf stream, which may allow it to continue to toss up thunderstorms around its center.

Nonetheless, rip currents along the coastline and showers will continue for Georgia and Florida overnight. Alberto is expected to slow down over the next few hours just south of the FL/GA line before being caught by the incoming trough, which is currently across the midwestern United States. Overnight tonight, Alberto will do a 180 and begin to move on to the north and east with coastal hazards tomorrow to the Carolina coastline. 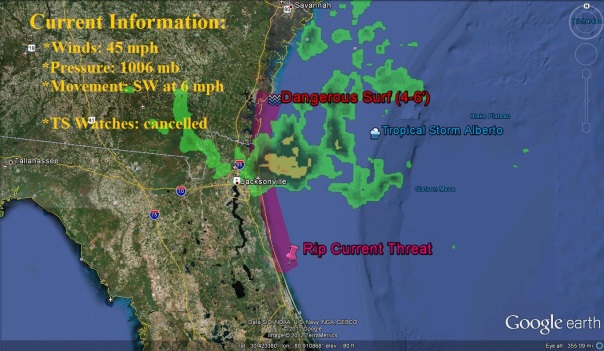 One of Alberto’s feeder bands is pushing through just off the coast of NE Florida and SE Georgia bringing a few showers and storms to the coast. Clouds are spread well inland over southern Georgia and are moving into northern Florida.

Here is a picture sent to me by Stacey Garvilla from just east of Jacksonville: 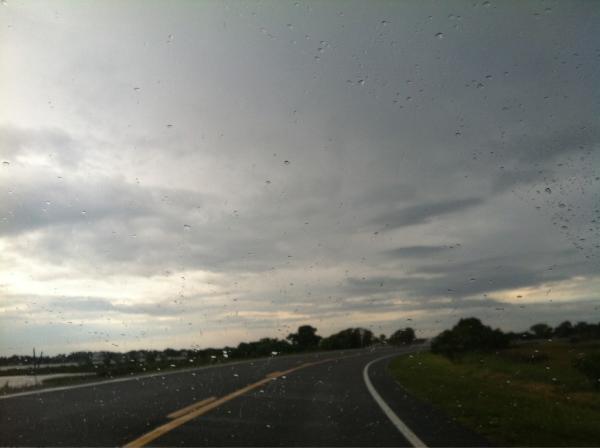 With Alberto about to be off our shores, the surf is up to 4-6 feet..a moderate chop on Atlantic waters.  I know that the surfers are out there, but keep in mind with the onshore wind to the southwest of Alberto that the rip current risk is much higher than normal. It’s best to stay out of the water for the next day or so until Alberto pulls away. Alberto will bring showers and storms into extreme NE Florida including Jacksonville during the next 6-12 hours as well as winds upwards of 20 mph near the coastline.

Just a reminder, this week is National Safe Boating Week. If you do have to go out on the Atlantic this evening make sure you are wearing your life jacket and take supplies needed if you need to be rescued such as flares and light beacons. For more information on this initiative from the NWS, go to http://www.nws.noaa.gov/os/marine/safeboating/ .